THE FLOOR™ SERVES AS A HORIZONTAL SHEAR WEB (LIKE A BULKHEAD OR DECK IN A SHIP) INSERTED IN THE TRANSITION ZONE BETWEEN THE BLADE MAX CHORD AREA AND THE ROOT SECTION. 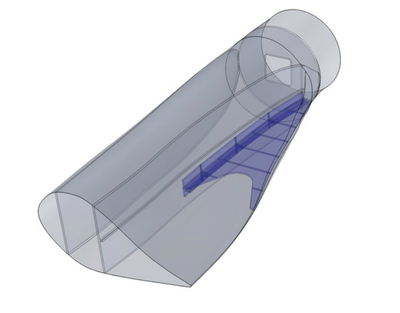 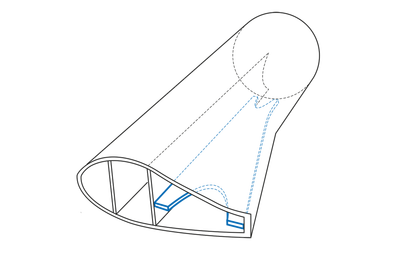 The increase in the edgewise load due to longer blades leads to more failures in the root region, that is if the blade design is not changed. The Floor™ is to be retrofitted in existing blades or implemented as a part of the design of new blades.

Failure mode
The “Floor™” makes it possible to transfer the edgewise loads (caused by gravity) smoothly into the root section and further into the hub. The Floor™ can be seen as a horisontal shearweb and takes shear forces from the trailing edge and transfer them into the hub through the shearweb. A flat panel in this location in the blade can carry a higher degree of in-plane shear forces, without a resulting “breathing/pumping” behavior.

Prototype development of the Floor
The product is still in the initial phases of development with the first prototype produced and installed in a full-scale test at Blaest in Aalborg. The product development has included several concept iterations in which the boundaries of the product were uncovered. Moving forward two different designs are considered, the y-shape on the left and the l-shape on the right. The evaluation of the two concepts includes the use of design drivers where industry experts have given input on variables such as ease of production and installation, functionality, transfer of shear forces, material composition etc.

The first prototype produced is a l-shaped composite plate. The Floor™ is attached to the trailing edge and fixed to the shear web. Through the next three years it is expected to test three different prototypes in full-scale tests and perform additional large-scale and subcomponent tests of in particularly the interfaces between the Floor and the blade.
Further development of the Floor™ will be done in the EUDP project RATZ (Root Area Transition Zone); where design, product development and full-scale testing etc. will be performed.