THE TRANSVERSE CAP STIFFENER™ TECHNOLOGY ADDRESSES THIS ISSUE BY STRENGTHENING THE BLADE CAPS AND MINIMISING THE MATERIAL USAGE. 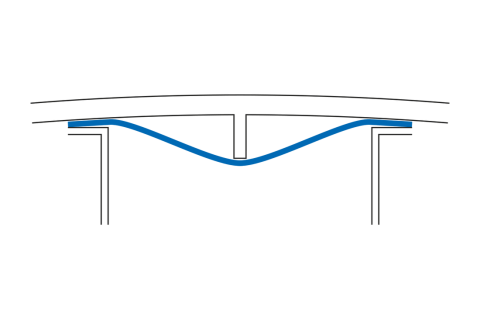 The Cap Stiffener™ is a reinforcement technology which allows a significant reduction in the use of materials in the spar cap of the blades. At the same time the structural strength of the blade is maintained preventing failures in the spar caps due to out of plane deformations, which take place when the blade bend towards the tower during operation.

The cap section of the blade is often characterized by thick laminates, as this part of the blade carry the flap wise loads. Thick laminates can be costly to manufacture and they are time-consuming to layup and infuse with resin. Due to the exothermic reaction in the resin during curing, high temperatures occur in the laminate and this may in return reduce the strength and durability of the laminate.
For a 44m load-carrying box the use of the Cap Stiffener™ enables up to 40 % material reduction in the cap section in a fully tested prototype. An estimation for the full blade weight sums up to a weight reduction of app. 20%.

The Cap Stiffener™ can be installed together with the shear webs in existing moulds without any alterations. Hence, the usage of the stiffener only introduces positive effects on the manufacturing.
For these reasons, the Cap Stiffener™ should be considered both for cost out of existing blade designs and for new blade designs.

​The lighter blades make it possible to increase the length of the blades; hence allowing for increased AEP.

Looking beyond the blades, the lighter blades open several possibilities for optimisation of the full turbine design including floating foundations and a large opportunity to drive down the LCoE for both the onshore and offshore turbines.